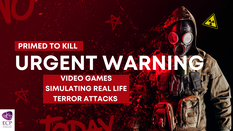 ​Experts have warned that some video games are simulating real-world terror attacks. The concern is that these games are being used to radicalise children.

UN-backed group Tech Against the Terrorism, have warned that terrorist groups, particularly the far right, are using the gaming world to recruit, vet and share propaganda. There have been previous incidents of terrorist attacks being livestreamed on gaming networks like Twitch, including the killing of ten people in a supermarket in Buffalo last year. Payton Gendron, 19, was responsible for the Buffalo mass shooting. He said in his diary "I probably wouldn't be as nationalistic if it weren't for Blood and Iron on Roblox".

There is also concerns that Isis has previously referenced Call of Duty in it's recruiting. Gaming platforms such as Discord, Steam , DLive, Reddit and Telegram are amongst the post popular for radicalisation. However, these platforms are trying to step up in response. This means that extremists are moving to other less policed platforms such as Trovo and Odysee.

Unfortunately, last year Rhiannon Rudd was groomed, sexually exploited, radicalised and absorbed by right-wing terrorism. For some time, she had been talking to older people online, including American Christopher Cook, who promoted a terrorist form of neo-Nazism, and formed a combat cell to carry out attacks. Evidence shows the then-partner of Rhianan's mother Dax also had an influence. The partner, American Dax Mallaburn, had been part of a white supremacist prison gang in the US. Rhiannon was charged for terrorism offences, despite being a victim of grooming and exploitation.

Criminals are using the internet to facilitate harm. As technology evolves so does the way in which criminals target and abuse those most vulnerable.
What to do if you think a child is being radicalised...

If you think a child or the people around them are involved in radicalisation and there is an immediate risk of harm, call 999 straight away.

The Department for Education has a dedicated telephone helpline for schools in England who have non-emergency concerns about extremism: 020 7340 7264.

Top Tips...
To help prevent harm coming to your child online you need to educate them on how to be digitally literate. Most risks online come back to self-affirmation. We all want to feel liked and wanted whether that’s on or offline.

Parental Controls.
You can allow your child independence online but still supervise their online activity. Parental controls can enable you to make sure that the content your child engages with is age appropriate, whilst also allowing them the chance to still participate in games and activities their peers might be using safely. Most games and apps now have parental guidance information available, and this provides you an opportunity to understand how a platform works. A really good website to use to understand enabling parental controls is ‘Internet Matters’.

Scaffolding.
Giving your child the freedom to explore online doesn’t mean being a completely hands-off parent.

We would encourage children to understand how to use technology. By children understanding how a platform works, including privacy settings and where to report concerns online, enables them to be technically literate.

In addition, children developing their media literacy. Being able to identify and understand the reliability of an online source. As well as social literacy often referred to as netiquette, understanding acceptable behaviours online.

Sometimes children may have negative experiences online such as being bullied, groomed, exploited, or exposed to other risk-taking behaviours. What is important is that these experiences are addressed and learnt from. It is absolutely acceptable to set boundaries with children. We also need children to be able to identify what risks they may be presented with online, where to go for support, how to report their concerns on and offline and how they can recover and get back online in a safe and responsible way.

It’s better to encourage them to use their own judgement based on the boundaries you have discussed and set out.
​