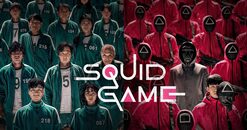 Squid Game
Understandably there has been increasing concerns over children copying the Netflix show ‘Squid Game’. Our Safeguarding Consultants have received several questions about the series from parents, carers and professionals. In this article we will try to address some of those concerns and explained why this series is not suitable for those under the age of 18.

What is Squid Game?
Squid Game is a South Korean Netflix series. This series is Netflix’s most watched series to date. The series is a survival drama which revolves around players in financial debt putting their lives at risk playing a series of children’s games for a chance to win billions of pounds.

Harmful Content
This series is rated at 15+ as contains death, violence, assault, suicide, murder and sexual assault. The players who participate in these seemingly innocent games are violently killed off if they do not complete a game or win. The ways in which players are killed off becomes more intense and gruesome as the series progresses.

The players are also encouraged to kill other players in a bid to be a step closer to finishing and winning the final prize money.
Even if children have not watched this series, they are likely to be aware of it due to popularity through social media, memes, gaming and conversation. The theme tune from the series features significantly on Tik Tok. It is possible that a child may be aware of this series without having actually watched it.
​
The themes within this series are not suitable for children, they are excessively violent and may prove unsettling for most adults to watch.

Risk Taking Behaviour
There have been a growing number of concerns regarding children recreating the games seen within the series without death as the outcome. These games are being played at school, an often recreated on social media platforms like Tik Tok. Children are not able to recreate this game in complete likeness due to the resources needed, but may still unintentionally put themselves at risk of harm.

Some of the most popular games children are recreating are:

Red Light, Green Light Game
This particular game is somewhat similar to ‘What’s The Time Mr Wolf’? Players will attempt to reach an end destination without being seen by a giant doll-like robot. When the robot turns around players must be completely still to avoid being killed. Once the robot looks away players can compete to cross the finish line.

Honeycomb Game
In this game players are given one of four shapes to cut out of a round piece of honeycomb. They must remove the shape using a needle. If the honeycomb breaks, then players are killed. There is an allotted amount of time in which they must complete the challenge or again face death.

There are concerns over children trying to make honeycomb and burning themselves, or heating objects like needles with a lighter to mimic behaviours seen in the game to win.

Top Tips…
There are some simple tips we would like to share with you to support you in your journey to help build and scaffold children in being digitally resilient.

Starting a conversation is important.

We all have busy lives, but having a level of transparency and interest in children’s life allows us to gain perspective and to ascertain behaviours and risk assess.  However, don’t limit your conversation to just one topic like ‘Squid Game’. Find out their interests and if you don’t understand a game or app, trend or challenge ask them to show you. Balance your interest in their online activities with space to be independent in a controlled way.

Parental Controls.
You can allow your child independence online but still supervise their online activity.

Parental controls can enable you to make sure that the content your child engages with is age appropriate, whilst also allowing them the chance to still participate in games and activities their peers might be using safely. Most games and apps now have parental guidance information available, and this provides you an opportunity to understand how a platform works. A really good website to use to understand enabling parental controls is ‘Internet Matters’.

Giving your child the freedom to explore online doesn’t mean being a completely hands-off parent.

It’s better to encourage them to use their own judgement based on the boundaries you have discussed and set out.

Explain to children why watching a series like Squid Game on Netflix is not suitable for children in an age-appropriate way.

Highlight to them the risks in recreating the games played within the series, and the harms that they and their peers could face.

For parents/ carers If you're worried about your child or need support call NSPCC helpline on 0808 800 5000.

If you discover criminal content when online then report it directly to the police or the Internet Watch Foundation.

If you're worried about online grooming or sexual behaviour online then report directly to the police or contact CEOP.

For Children & young people if they're worried or want to talk, encourage them to contact Childline Online or call 0800 1111.

Check out our Resource Centre for further information and useful online safety tips.
​